It’s not the rush you’d expect. This one happens to be Erik Rush, and I refer to him as mad not because he’s angry, but because he seems to be rather mentally unhinged.

My story begins with a blog post by Ed Brayton. Ed’s post is “Rush: The Commies are Coming, Led by Obama!” The post was referencing one of Erik Rush’s recent columns; Resurrecting Communism’s Glory Days. You’ll notice that the article is posted on the Canada Free Press web site. The “subtitle” for that site is “…Because without America there is no Free World.” That should give you a hint as to their usual type of content.

Yes, Erik Rush is convinced that we need to be afraid of the Red Menace that is communism. I had to look at my calendar to be sure that the year wasn’t 1958, and that the date wasn’t April 1st.

It’s simply amazing how the nutjobs like Erik Rush feed off of each others’ delusions. Erik’s article starts with this gem:

In his February 1 column, Dr. Steven Lambert reprinted in part a section of testimony that was given before the House of Representatives in 1963; this cited 45 declared goals the Communist Party in America had in their strategy for taking the country over. The entire reprint is available in several places online, so I won’t use up space to include them here.

How could one argue with testimony given before the US House of Representatives? Here’s a hint for you: All sort of bullshit gets read into the congressional record. To paraphrase a meme, “I saw it in the Congressional Record, so it must be true!” The post Mr. Rush refers to is citing the US Congressional Record for January 10, 1963. If you’ll take time to examine this citation, you’ll find mention of the original source.

Current Communist Goals
EXTENSION OF REMARKS OF HON. A. S. HERLONG, JR. OF FLORIDA
IN THE HOUSE OF REPRESENTATIVES
Thursday, January 10, 1963

Mr. HERLONG. Mr. Speaker, Mrs. Patricia Nordman of De Land, Fla., is an ardent and articulate opponent of communism, and until recently published the De Land Courier, which she dedicated to the purpose of alerting the public to the dangers of communism in America.

At Mrs. Nordman’s request, I include in the RECORD, under unanimous consent, the following “Current Communist Goals,” which she identifies as an excerpt from “The Naked Communist,” by Cleon Skousen:

The section in each day’s Record following the House and Senate proceedings is known as the Extensions of Remarks. This section is now used only by Members of the House to include additional legislative statements not delivered on the House floor as well as extraneous materials such as the text of speeches delivered outside Congress, letters from and tributes to constituents, and newspaper or magazine articles.

That’s right. The citation that they refer to was never read as testimony before congress. It was another bit of bullshit that a congressman put into the record to placate an anti-communist constituent and highlight his own sense of patriotic nationalism.

The really strange part is that you’ll find no such list in the original version of The Naked Communist by W. Cleon Skousen. The author discusses these goals in his book, but someone else created the list from his work.

Here’s the beginning of the Wikipedia entry for Skousen:

Willard Cleon Skousen (January 20, 1913 – January 9, 2006) was an American author, conservative American constitutionalist and faith-based political theorist. He was also a prolific popularizer among Latter-day Saints (Mormons) (LDS) of their theology. A notable anti-communist and supporter of the John Birch Society, Skousen’s works involved a wide range of subjects including the Six-Day War, Mormon eschatology, New World Order conspiracies, and parenting. His most popular works are The 5,000 Year Leap and The Naked Communist. A book by Skousen on end times prophecy, The Cleansing of America, was published by Valor Publishing Group in 2010, four years after his death.

If you’d like an interesting read about Skousen and how Glenn Beck came to worship his words, check out Meet the man who changed Glenn Beck’s life by Alexander Zaitchik. Zaitchik’s article is subtitled, “Cleon Skousen was a right-wing crank whom even conservatives despised. Then Beck discovered him.” Let’s just say that I think Alexander is being kind with that description.

Did Mr. Rush (or whomever manages his Twitter presence) see my tweet? Indeed, they did. Was there any mention of refuting my accusations of ignorance and insanity? See for yourself: 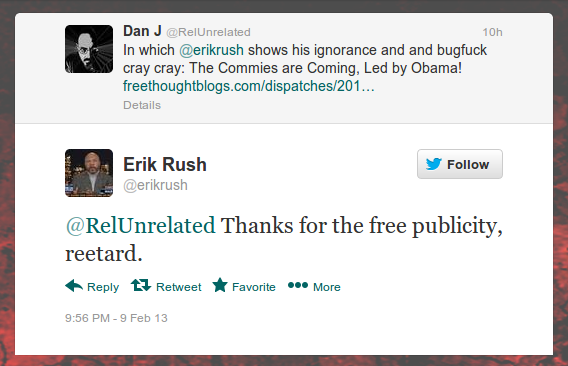 That’s right. He thanked me for “free publicity” (There’s no such thing as bad publicity, right?) Then he calls me a “reetard,”, which I can only assume is a misspelling of “retard.” Yes, Erik Rush went for the R word.

I have some friends on Twitter who are working very hard at curbing the use of that word. I know there are many more who do the same. I felt the need to let the world know how Erik Rush thinks of people who aren’t just like him.

Of course, my own words would no longer reach Mr. Rush. You see, he also took the expedient step of blocking my account from his Twitter feed.

The crazy will continue

I have no doubts at all that Erik Rush’s crazy diatribes about the Obama in his head, and the Reds under his bed, will continue. It would be completely laughable for but one reason: Some people take him seriously.